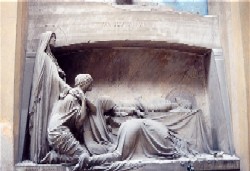 This topic may well be a "Not again!" FAQ&A to those genuine Joy Division fans out there. My apologies in advance.

To me, from the very beginning of my encounter with their music, Joy Division has always meant their second (and also the last original) album Closer. To be more specific, Joy Division to me was the four songs on the LP B-side, namely "Heart and Soul", "Twenty-four Hours", "The Eternal" and "Decades", which again always sounded as if they were intended to be a loosely inter-related suite. And last but not least, Joy Division to me has always been inseparably connected to the monochrome "picture" on the record sleeve, occupying approximately the bottom three fifths of the square white quality bond paper. Their music was and still is literally helpless yet positively powerful at the same time, and the scene recalled therefrom as that of depthless lament and despair.

For well over two decades, somehow I had believed that this "picture" on the record sleeve was perhaps a piece of etching, or else graphically retouched work of some copper engraving original, as often found in the typeset books printed in the European Middle Ages. The shadows and lights of this "picture" seemed to me to be too impressive and dramatic to be true if it were a photograph of some real scene. Besides, a couple of years after the release of this album, I happened to come across and read an article in a Japanese literary magazine which referred to an oil painting dedicated to the memories of Ian Curtis, by a British painter who took the motif of his work from this sleeve "picture." This anecdote about which I always vaguely remembered may have contributed to forming of my uncorroborated belief that this was a "picture" of sort, not a photograph.

As said above, the music of Closer and this record sleeve "picture" have always been invariably connected with each other in my mind. If this "picture" was indeed an etching or copper engraving artwork, what is its identity and who in the world created such an impressive piece? Up until some months ago, this kind of question had never surfaced while I continued to listen to the album countless times. Yet as soon as this question popped itself up, I could not help but finding out about the "picture." Christian implications or influences are obvious here, and its capability of the scene depicted therein to leave strong and lasting impressions is quite remarkable, so this must be created by a well-known artist?

Apparently, however, there seem to exist very little information available on the web explicitly identifying the origin of this "picture," although there do exist quite a few resourceful quality websites dedicated to Joy Division. Searching by almost every possible combination of keywords that may hit, I came across at long last the Wikipedia (English edition) which says:

The album cover was designed by Martyn Atkins and Peter Saville, with photography from Bernard Pierre Wolf. The cemetery on the cover is Staglieno Cemetery in Genova, Italy. [The original is the second paragraph of the entry Closer (album).]

So... this was a photograph, after all.... My own unfounded belief over some twenty years got finally corrected. But now, who is this Bernard Pierre Wolff (whose surname is sometimes spelled as Wolf (as in the Wikipedia article) or as Wolfe)? And this is a photo of a cemetery? What is this "Staglieno Cemetery"?

Shame on me, I did not know that cemetery/grave sculpture has a long tradition in the history of Western art. Michelangelo's Medici Tomb sculptures are regarded as one of his masterpieces, and many photographers are apparently fond of choosing these sculptures as their subject.

This "Staglieno Cemetery" as photographed by Wolff and used on the Closer album cover, is also apparently quite well-known for its numerous unique grave sculptures. At the official website of Japanese Collegium Mediterranistarum, I was able to find the following reference to this cemetery, in an essay written by Ms Yoko Kamenaga:

The most likely places for Genovese to name as best tourist attractions of their city are neither museums nor churches. They are either of the following two: One is the Aquarium (Acquario di Genova) designed by the architect from there Renzo Piano; The other is the cemetery Cimitero di Staglieno, about which I will write in this essay....

... This spacious cemetery contains many grave sculptures in various styles of Classical, Neo-Gothic, Neo-Renaissance, Romantic, Naturalistic, Symbolism, Liberty, as well as huge chapel artifices. Particularly notable are the emotional expressions and realism of the grave sculptures found in the Corridor of the 19th Century[?]....

[Please note that this is an unsolicited translation done by this writer from the Japanese original, titled "Place for Prayer: Cimitero di Staglieno in Genova".]

This essay by Ms Kamenaga also refers to the book Images of Man and Death (Images de l'homme devant la mort) by French historian Philippe Ariès, which has many photographs of the Staglieno Cemetery.

So far so good; some background about grave sculpture in general and where that particular tomb sculpture on the Closer cover is located have become clear. Well then, who is this photographer who was able to capture and hence eternalise this impressive, tragic scene of intricate shadows and lights?

Another series of searches on the web brought me to the website by Mr Michel Enkiri, who took the photo of the Closer cover tomb sculpture on the spot in Genova for himself, which you saw at the beginning of this article. This site by Mr Enkiri shows you many photographs shot by Wolff, along with the original Wolff Closer cover photo. You will also find the lying Angel[?] photo by Wolff which was featured on the cover of 12inch "Love Will Tear Us Apart" issue by Joy Division. Bernard Pierre Wolff was born in 1930 in France, died in 1985, five years after the release of Closer. Mr Enkiri writes about the work of Wolff as follows:

Most Wolff's B&W pictures that were published are taken "live" in the streets (with his discreet Leica), or portraits. He was fascinated by people on the edge, countries like India or Japan, or cities like New York or London, where everything is possible.

His pictures are focused on men, and they talk to the heart as well as to the eye. They contain joy, despair, friendship, pride, madness, beauty and ugliness, often a real sense of humour and a kind of poetry.

He managed to captivate what he had seen in a second, with the right angle and the right light, rendering the original atmosphere with superb accuracy. His pictures often include a part of mystery, and push the viewer to recreate a story around the image.

Looking at the photos by Wolff in Mr Enkiri's website, I can only nod and heartily agree.

I have continued to listen to Closer from time to time, numerous, countless times for well over two decades. When I became heavily (and at times clinically) depressed, I always turned to this album and got myself literally dosed with its music. This may sound overly serious, but I think I would not have been alive now if I had not encountered with the four songs on the LP B-side of this album. Pondering about it, I find it rather ironical that the dark, depressive voice and lyrics sung by the vocalist who hanged himself only months prior to the release of this historical masterpiece keep on helping myself and healing my equally helpless depressive bouts.

Anyhow, if I hadn't begun searching the web for more info on the identity of the Closer cover, most probably I would have believed that the cover artwork was a "picture." till the end. By arriving at Mr Enkiri's website, and having confirmed that this "picture" was actually a photo, learnt that its subject was a real tomb sculpture located in Genova, Italy, and that the photographer who had sadly been dead for many years now took quite a few other impressive photographs, I felt as if I had gone on to and returned from a rather long journey.

[Translation completed and posted on the 22nd of April, 2004. The original article in Japanese with the same title was posted on the 15th of February, 2004, under the category: music.]

[English Articles Index of this site is here.]

[Added: the 30th of July, 2004] Please refer to the bottom of this page for an addendum as to the history of the Staglieno Cemetery.

[Added: the 30th of July, 2004] Our correspondence continues between Michel-san and myself, and as I had told Michel that I cannot read Italian, he was so kind to send me the following translation of the relevant passages published in cimitero monumentale: Staglieno e la sua storia at comune.genova.it.

I have already received this via e-mail from Michel-san on the 8th of July, 2004, but due to pressing of my personal matters and also to a rather prolonged server-side problems caused by network setup renewal at the present hosting service in mid July, it took me over three weeks to publish this addendum and make my small article above much more enhanced. My most sincere thanks are due to you, Michel-san, and my apologies for this belated update.

History of the Staglieno:

The Staglieno cemetery officially opened to the public Jan 1st 1851. At this time it was largely incomplete, but had its basic specific architecture functional and symbolic aspects.

The project had already started in 1835 with the architect Carlo Barabino (1768–1825) — which had an important part in the Neo Classical physiognomy of Genova, and created buildings such as Teatro Carlo Felice, the Palazzo dell'Accademia, etc — just before he died of cholera. The project was then transferred to his co-worker Giovanni Battista Resasco (1798–1871) whose plans were approved in 1840. The works began in 1844, in the area of Villa Vaccarezza, where few people lived and not very far from the city centre.

From the original project of Barabino he kept the rectangle as basic structure, enhancing the monumental character. This brought great admiration from the visitors, who entered via the main gate directly in this scene, with homogeneous porticos, and the "Pantheon".

Once the complex structure of the cemetery works were over, in the 80s, this impact remained strong, even raised by the natural surroundings: The Pantheon with the porticos, the green hills — the zone of Boschetti & Valletta Pontasso — with vegetation and chapels and dissemintated monuments (like the tomb of Giuseppe Mazini and many names of the Risorgimento).

This integration in the landscape was increased in time, like the non-Catholic area or the cemetery of the English, in the last decades of the 19th century and beginning of the 20th. The choices of Resasco made Staglieno the model for cemeteries Italian and abroad, combining the Neo Classical architecture, of Mediterranean tradition, a kind of a "gallery" of monuments, and the "natural" type, more specific after the 40s of northern Europe and Anglo-Saxon countries (beginning with the Pére Lachaise in Paris).

The growth of the city being one of the major industrial and commercial centres of northern Italy, provoked several changes. Resasco himself made a change to the north-east area, with new semi-circular porticos, which should have been followed by another one. Only one was built in the 90s, rich with Liberty and Déco works. More works brought several periods to other porticos, as well as expansion to other areas. Like the Valle del Veilino — already sheltering the non-Catholic graves — with the building of the Porticato Montino, rich of Déco & "Novecento" works, and also the area for the dead of WWI (1935–1936), or the latest monumental change with the Portico S Antonino (began 1937, inauguration 1955).